I was snoozing, and woke up to see a large city passing by underneath...
"why, that looks remarkably like Phoenix" I thought. And indeed it was,
the city of Nimue's birth, so I took a picture. 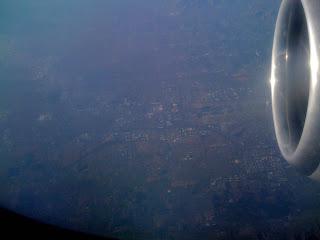 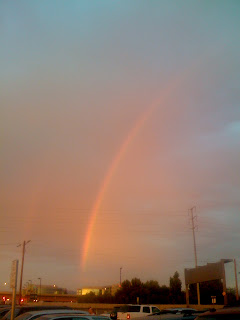 But Anna and Nim picked me up at the airport, and we walked out of the
terminal to the sight of a spectacular rainbow -- one expected to see a
pot of gold at the end! And if you look closely, you'll see that it's
even a *double* rainbow.

Posted by BikeBoy at 9:54 AM No comments: Links to this post 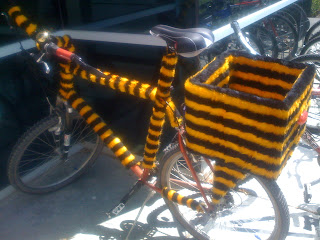 My co-worker Vytas rides this fantastic bike... not only stripey, but
furry, too!
Posted by BikeBoy at 9:47 AM No comments: Links to this post

Where the weather is fine (well, 100 deg and 90% humidity, but it ain't raining yet!) Tropical storm Edouard is bearing down on us, predicted to come ashore early Tuesday morning. This should be interesting...
Posted by BikeBoy at 7:57 PM No comments: Links to this post

Quite brilliant, passed on by my friend Dave:

Running the Numbers
An American Self-Portrait

Running the Numbers looks at contemporary American culture through the austere lens of statistics. Each image portrays a specific quantity of something: fifteen million sheets of office paper (five minutes of paper use); 106,000 aluminum cans (thirty seconds of can consumption) and so on. My hope is that images representing these quantities might have a different effect than the raw numbers alone, such as we find daily in articles and books. Statistics can feel abstract and anesthetizing, making it difficult to connect with and make meaning of 3.6 million SUV sales in one year, for example, or 2.3 million Americans in prison, or 32,000 breast augmentation surgeries in the U.S. every month.

This project visually examines these vast and bizarre measures of our society, in large intricately detailed prints assembled from thousands of smaller photographs. Employing themes such as the near versus the far, and the one versus the many, I hope to raise some questions about the role of the individual in a society that is increasingly enormous, incomprehensible, and overwhelming.

Posted by BikeBoy at 9:55 PM No comments: Links to this post