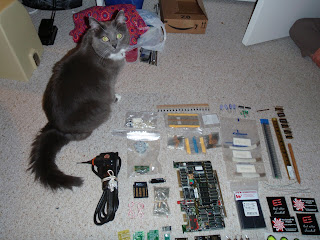 I received one of The Great Internet Migratory Boxes of Electronics Junk (TGIMBOEJ) not long ago. The concept behind TGIMBOEJ is simple: put a bunch of stuff, suitable for using in an electronics project, in a box. Mail said box off to an eager recipient. Recipient takes some stuff out, puts some stuff in, and sends the Box off to the next recipient. Hilarity ensues :-)

One additional requirement of participation in the TGIMBOEJ project is documentation -- hence this post, and future ones on what gets made out of the junk (search on keyword 'tgimboej' to find them all.)

As it turns out, Evil Mad Scientist Labs, the instigators of TGIMBOEJ, have located their lair conveniently down a bike path from my house. When the Mad Scientists contacted me to see if I wanted a box, I took a ride over there and brought it home strapped to the back of my bike.

Here's what was in it: 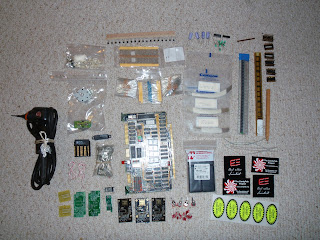 "What a great opportunity to get rid of some of your useless crap that's been cluttering up the house" said^H^H^H^H thought my lovely wife -- so the box will depart here containing more junk than it arrived with.

The box now goes to one John Foster -- who was selected for his appreciation of beer, spacecraft, and geekery. Have fun with it, John!
Posted by BikeBoy at 9:49 PM 1 comment: Links to this post

The amplified "digital TV" antenna I bought last year has never performed very well in our house; the signal level varies a lot, and is often so low that the station is lost for minutes at a time. I tried an experiment quite a while back, and ran a cable up to the roof; I stood up there pointing the antenna around to see if altitude and a really clear line of sight helped any. The results weren't encouraging.

I finally decided to do something about the situation (e.g. basically unwatchable TV) when I came across this article from Make on an easy-to-build antenna design. I had most of the parts already lying around the garage, and a quick trip to OSH got me the rest for about $5.

Testing in the house showed that the home-brew antenna performed just about as well as the amplified antenna -- but that still wasn't what I was hoping for. Today, I took the new antenna up on the roof, and the results were very good. Channels that used to be at signal strengths of 5-6 are now pegged at 10, and the fluctuation I used to see is gone. Success!

My next step might be to cannibalize the old antenna to steal its amplifier...
Posted by BikeBoy at 6:17 PM No comments: Links to this post