The cycling spirit was certainly in fine fettle in Great Britain, circa 1955, as seen in these wonderful video clips. Beer en route! Bike cars on the train! Check out the nifty bikes, not to mention the fun clothes...

Posted by BikeBoy at 11:34 PM No comments: Links to this post

Issue: Bike lane squeezes from usable width (4 ft?) to zero width, entering left-hand corner at bottom of hill, on a route popular with groups of cyclists and known for the local population being intolerant of cyclists using the lane... this recent re-striping (not visible in Google Maps as of this writing) seems designed to provoke bicycle-car conflict. Given the amount of bike traffic this route ("The Loop") gets, and the consistently wide shoulder everywhere else, this re-striping is ill conceived.

It appears that the re-striping was performed to accommodate the addition of a left-turn lane.

Solution: Put it back the way it was, let the cars wait a moment to get around those who must turn left.

I'll post some photos next time I'm out that way.


View Bicycle-Unfriendly Urban Design in a larger map
Posted by BikeBoy at 9:17 PM No comments: Links to this post

I recently purchased some rather expensive, supposedly invincible tires for my commute / touring bike. The Schwalbe Marathon Supremes are acclaimed as about the most indestructible tire out there, short of a couple truly massive things that really aren't much fun to ride on.

Now, if you ever found yourself asking, as I have, "Self, just what would it take to puncture one of these tough tires?" I can now provide an answer. 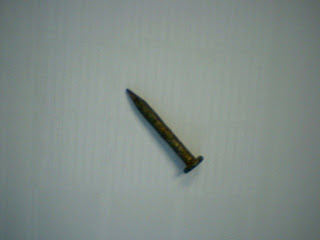 Very pointy, kinda short, big flat head for maximum leverage... went right in through the middle of the tread, all the way to the head. Psssssssshhhhhhh.... $^&%#$&*&!

Posted by BikeBoy at 11:37 AM No comments: Links to this post

Our DSL continues (for the past 2 months) to be dismally slow. If AT&T has run fiber to our neighborhood, I'm just gonna have to give up on 'ol Speakeasy.net and move on over...

Posted by BikeBoy at 6:58 PM No comments: Links to this post

This is quite possibly the coolest art video I have seen in the past year... a glowing "walk signal" character takes a stroll through night-time Tokyo, via stop-motion video. It's easier to watch it than to try to explain it!

Tip 'o the hat to Laughingsquid for finding it (at Pink Tentacle)!
Posted by BikeBoy at 11:04 AM No comments: Links to this post

Dear friends and family: I love you all. I really, really do! It's simple enough to say, and I don't say it enough. So I want you each to know how much I value having you as part of my life. Whether we're riding bikes, going camping, drinking beer, doing chores, reminiscing about fun (and challenging) times we've had, or thinking about what the future holds: I love you.

So you might reasonably ask, what spurs me to write such sentimentality on a Monday morning? Well, Heidi Swift does. She reminds us that the tragedy in Haiti is not finished, and that the Haitians still need our help. Heidi has offered to donate $0.10 to relief efforts for every one of her readers who tells someone they are loved... and while that's reason enough, her appeal also made me think about how infrequently I tell those I care about, just how much I care about them.

So, for the people you love: let 'em know! And don't forget about Haiti.
Posted by BikeBoy at 10:09 AM 3 comments: Links to this post

Bike Chick's "ride around town" bike, a venerable Trek of uncertain heritage but vintage ~1986, and veteran of many adventures, has been the recipient of much TLC on my part. First, the pedal threads on one of the crankarms stripped out (while we were out trying to do errands, resulting in a long, one-legged ride home.)  Thus I discovered that the left and right crankarms were actually of not only different brands, but different lengths! This led to prompt replacement of the crankset with whatever I had handy, which just happened to be a nice Dura Ace 39x53. The gearing was a little stiff for a town/touring bike, but Bike Chick is strong, and this was what was available at no cost.

The new crankset, of course, would not fit on the old bottom-bracket spindle. So the Dura Ace bottom bracket bearings and spindle got installed too. The 'ol Trek was starting to perk up a bit!

At some point, I installed fenders. The bike was getting an increasing amount of use in rainy weather, and once Bike Chick got used to keeping her toes from interfering with the front fender, I think she really appreciated the reduced road spray.

Soon, Bike Chick mentioned that the front end didn't feel right... the headset was shot, but I had a new-in-the-box Shimano 105 headset in the parts bin... on it went!

"The brakes are a little scary" said Bike Chick one day, upon returning from a 25-mile commute ride in the pouring rain. She was right -- the vintage Dia-Compe levers and calipers were never that great when new, and these had seen a lot of neglect. The calipers were sticky, the pads were awful, and she couldn't reach the levers very well. Unfortunately, I think this bike might have started its life with 27" wheels, or else the geometry is just odd; either way, modern calipers (I had some serviceable Shimano 600 dual-pivots in the bin) are too short to work with the 700c wheels. Rebuilding the Dia-Compe calipers helped a lot, and new pads gave a bit more grip. The brakes were better, but still not great. I picked up some of my favorite brake levers, the Cane Creek SCR-5, figuring I'd install them the next time the tape was off the bars. They're available in a "compact" version, to better suit female hands -- personally, I think the shorter reach is nicer for my long-fingered hands too. These levers have a great ergonomic hood, and the lever has a nice shape too.

Around Christmas, Bike Chick hinted that raising the handlebars might be appreciated. There wasn't time over the holidays to do it, but the task made it onto the list! Last weekend, I put a bar and stem from the parts bin onto the bike, just to see how it went.  The reach to the brakes was still too long, so we made some measurements, and decided to (gasp!) spring for some brand-new parts. Specialized makes a nice compact bar (both reach and drop are less than the "classic" dimensions, and work especially well for getting the fit right for women) as well as a stem that can have the angle adjusted over a wide range, using shim-collars. I fitted these to the bike and got everything else in the cockpit ready to go (adding new Teflon-coated brake cables to further enhance the weak brakes, and installing the Cane Creek levers.) You can see in the photo that I'm trying out the "Rivendell method" of securing the bar tape with a wrapping of hemp twine. I thought I'd give this a shot, as the tape is a squishy gel-padded type, that doesn't seem to stay put when secured only with a few wraps of electrical tape. We'll see how it holds up -- it's kinda funky looking without suitably retro cloth bar tape, but if it works I'll be happy.

After a test ride (up Highway 9, then down Page Mill) Bike Chick reports the bike as "transformed" in its handling!  "Well of course," sez I, "it fits you now!"

The Trek carries on, happier, I suspect, for being better loved. 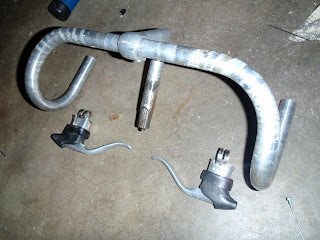 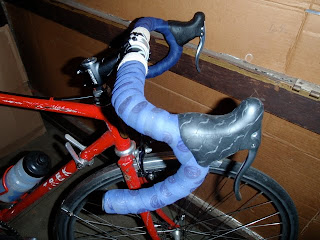 Back in the day, I knew a fellow, Sheldon, who would come on our training rides sometimes. He was a few years older than the rest of us, he had raced as a top amateur (a "Cat 1" on a name-brand team).  Several years into his cycling career, he developed bad allergies and "retired" from racing to go back to school and get a degree. Sheldon would say to us: "I don't train anymore - I just ride." And that's what he did; he wasn't trying to get faster, or peak for an event. He had nothing to prove to anyone, and perhaps, especially, to himself. So Sheldon simply rode, and enjoyed the time he spent on the bike, and he was still faster than most any of the rest of us on any given day.

There's a lesson to be learned from Sheldon, applicable to more than just bike racing.
Posted by BikeBoy at 9:16 PM No comments: Links to this post

I had a great time as the featured guest on the DIY Drones podcast recently (10 January), talking about future opportunities and applications for civilian use of UAVs, as well as NASA's involvement. The community of enthusiasts at DIY Drones amazes me with the sophistication and eagerness they are bringing to the world of small UAVs -- they truly represent the future.
Posted by BikeBoy at 6:29 PM 1 comment: Links to this post

I just ran across Kickstarter, and it's brilliant. Go look. Now.

They also have a blog.

Basic idea: provide a "funding platform for artists, designers, filmmakers, musicians, journalists, inventors, exploreres..." that lets said creative folks offer up a concept, solicit contributions, and if a threshold amount is achieved, launch the project. There are some great (and some greatly kooky) projects at Kickstarter!
Posted by BikeBoy at 8:14 PM No comments: Links to this post

I made a little project for some friends and relatives this Christmas... using an Arduino microcontroller board, an Altoids tin, and some assorted bits, I built a simple interface to a virtual Etch-a-Sketch (written in Processing). Two knobs control the up-down and left-right drawing of a line on the computer screen; a pushbutton changes the color of the line being drawn; a toggle switch changes between keeping the line continuously on the screen, and fading out the tail as the head of the line is being drawn. Just like a real Etch-a-Sketch, shaking the box erases the screen (using a tilt-switch inside the tin.)

This project is really a recyclable gift -- the tin, and the Arduino inside, is just a simple interface to the computer; the Arduino is really overkill for the purpose, and all the real work is done on the PC side. That means I can send my gift recipients new pieces of fun software to run, using the same interface box, or they can send the box back to me when they get bored with Etch-a-Sketch, and I can turn the Arduino into something else for next Christmas. Or, for some of the giftees, they will discover that they have a nifty new platform for developing projects of their own (I provided a CD with all the necessary Arduino and Processing tools!) 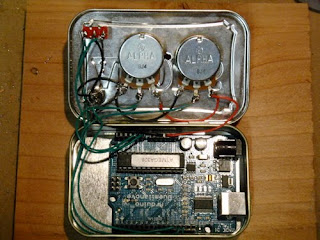 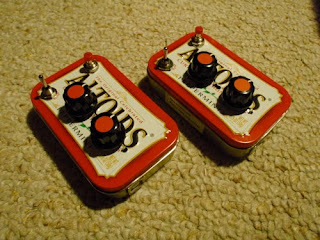